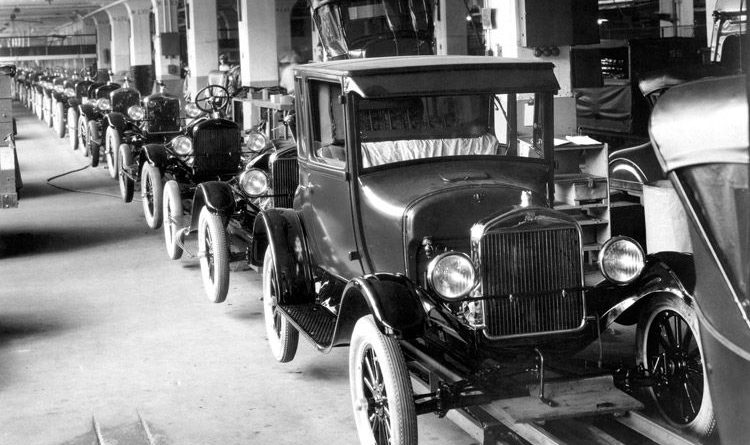 Henry Ford has been credited with inventing the automobile and the assembly line. In truth, he did neither!

What Ford did, was change the way manufacturers operate. He brought together a collection of innovative ideas that helped revolutionize production – leading to the term we now recognise as mass production.

When production began on the famous Model T Ford, it took over 12 hours to construct the chassis and body of the vehicle. Fast-forward 20 years to when the last Model T came off the production line, it was making one car every twenty-seven seconds!

So, how were such advancements made, and where did Ford get his idea for the assembly line?

Upon advice from a fellow business owner, Ford visited a meat-packing plant (Swift & Co) in Chicago, Illinois. He saw the carcasses hung from the ceiling and progress through the plant to different workstations where the cow was processed. Ford’s idea for an assembly line began by viewing a “dis-assembly” line. He stood there watching the beef going from station to station and processed by specifically trained workers only doing one task. (Up to this point, production at the Ford plant required the workers to move from vehicle to vehicle, while the car remained stationary until final completion).

This was when the light bulb went on for Henry Ford, and he figured he could put together a car the same way the meat processors were taking apart a cow. This concept helped him slash the cost of an automobile from about $950 to $280 – making it more affordable and even more popular with the American public.

For business owners and individuals, this success story is testament to the value of continual refinement of an existing process. It’s also an endorsement for connecting with others within, and beyond, our chosen industry/profession to solve problems.