A SCARF for all Seasons 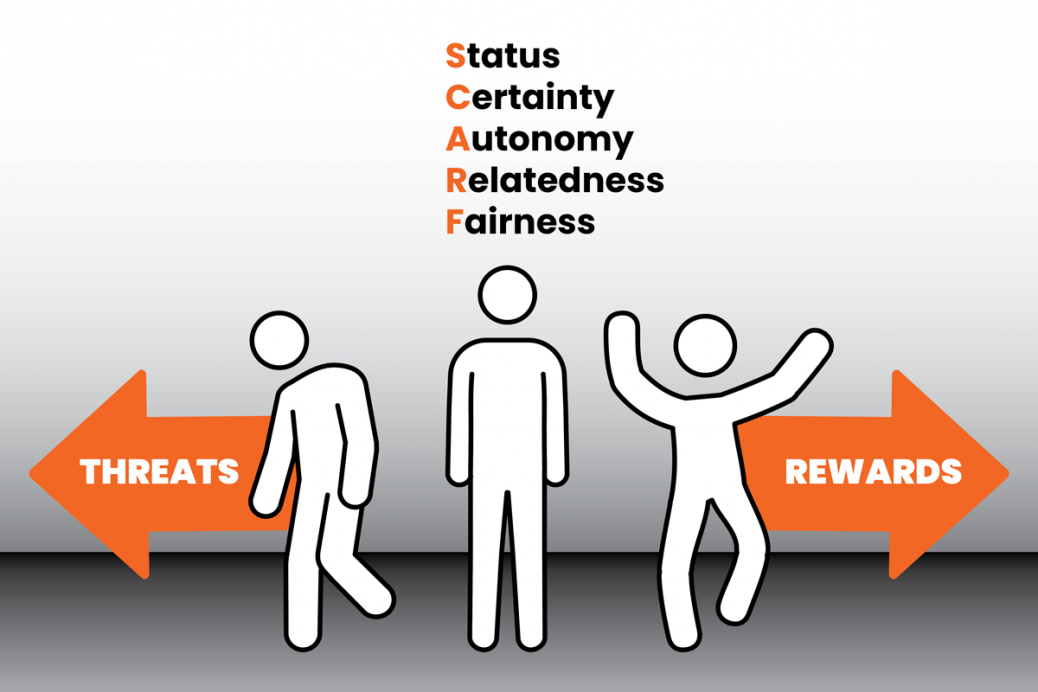 “Much of our motivation driving social behaviour is governed by an overarching organizing principle of minimizing threat and maximizing reward, and social needs are treated in the brain in much of the same way as our need for food and water.” (Dr David Rock)

These key foundations, described by Dr Rock (cool name) play out in our brain as an approach-avoid response. A basic function of our brain is to distinguish when to approach or avoid something. This response has developed as an evolutionary response and has largely helped humans stay alive. We are intrinsically motivated to move away from perceived threats and toward perceived rewards. Any positive emotion or reward generally creates action, whereas a negative emotion or punishment causes a threat stimulus in our brain, which leads to avoidance.

The premise of the SCARF model is that the brain—as constructed over time—makes us behave in ways which will either minimize threats or maximize rewards.

The SCARF model was developed by Dr David Rock at the Neuroleadership Institute in New York.

Check out the brief overview here on You Tube.

SCARF stands for the five key “domains” that influence our behaviour in social situations.

You have already experienced primitive-like reactions, with strong emotions in certain social situations.

For example, when left out of an activity, you might perceive it as a threat to your status and relatedness. Research has shown that this response can stimulate the same region of the brain as physical pain. In other words, our brain is sending out the signal that we are in danger.

To determine which of the 5 domains have the greatest influence on your responsive behaviour, consider taking the online assessment designed by the team at the Neuroleadership Institute.

You can use the SCARF model to work more meaningfully alongside others by minimising perceived threats and maximising positive feelings generated by rewards. The model is useful when coaching or leading others, especially in providing feedback that is well received.